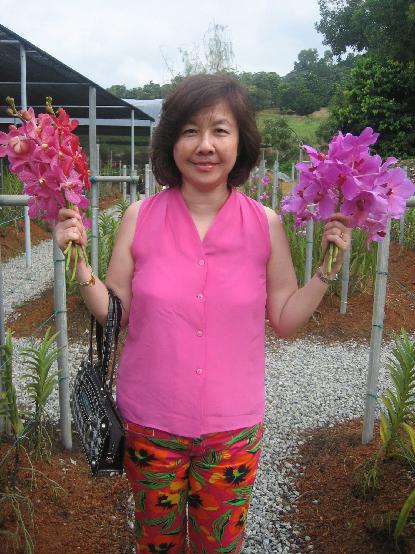 Hi there. In July 2016, my mother, Philomena Cheong Mei Ling, was diagnosed with stage III uterine sarcoma, a very rare form of cancer. Our whole family was devastated by the news and became very worried. However, we were optimistic as she was being taken care of by a world class cancer center, Princess Margaret Cancer Center in Toronto.

Soon after, she had undergone surgery to remove the primary tumor. However, post-surgery diagnosis had found that her cancer had already spread to her lungs. My mother then had chemotherapy with taxol for 3 sessions, but it was found to be ineffective. Her hospital then offered her another chemo drug with doxorubicin and a clinical trial that could boost her immune system, but admited that these had low probabilities of succeeding.

As a family, with nothing more to lose, we then decided to try alternative and natural treatment protocols. My mother started drinking fuciodan, eating apricot seeds and juicing vegetables, but a CT scan in November showed no improvement. After much research and consulting with Ralph Moss, a medical writer, it was suggested that we travel to Austria and seek treatment from Dr. Ralf Kleef, a doctor specialized in hyperthermia and immunotherapy.

We then consulted with Dr. Kleef and his clinic online, and left for Austria in early January 2017. We spent almost 6 weeks in Vienna, and it was a cold winter. During this time, mother had several complications from her cancer, and unfortunately we weren't equipped to diagnose her properly. It was a very tough period for our whole family, but during this time, mother continued to remain optimistic and was happy that she could spend time with all her family.

On our 5th week in Vienna, Dr. Kleef admited that he wasn't very optimistic about his treatment progress and strongly advised us to return to Toronto before things got worse. Immunotherapy is very funky. Sometimes you see disease  progression in patients early on, but later on when their immune systems have adjusted, then the cancer starts getting attacked by the body's immune cells. Because of this, we remained optimistic and prayed hard everyday.

Upon returning to Toronto, we checked mother back into PM. Upon new diagnosis, her doctors were very concerned and didn't think the treatments in Vienna had worked. At PM, she then had radiotherapy to treat some smaller lesions, which left her very weak. Still, we remained by her side everyday and supported her as much as we could.

Unfortunately, due to complications from the disease, my mother had passed away on March 16th 2017, with relatively little pain while being surrounded by family. We buried her in Christ the King cemetery in Markham. Strangely enough, she seemed to have contacted them 2 years prior...

Sarcoma is a deadly form of cancer, accounting for only 1% of all cancers. It is particularly resistant to chemotherapy, which makes it very difficult to treat. Further, the chemotherapy drugs used to treat sarcomas have very severe side effects that affect heart functions, memory, and much more. Therapies for sarcomas have had very little progress over the last 40 years, and even less for uterine sarcoma specifically.

However, today there are doctors like Dr. Seth Pollack who are investigating immunotherapy and its effect on sarcomas. Immunotherapy is an upcoming form of cancer treatment that has seen success in previously untreatable cancers, such as non-small cell lung cancer, in the last 3 years. While the number of patients that respond to immunotherapy treatments is still low, the people that do respond to it have incredible responses and some even lifelong remission.

After years of war on cancer, it appears that a cure may finally be within reach with immunotherapy and other upcoming cancer treatments. My friends, please consider a donation to Fred Hutchinson Cancer Research Center in memory of my mother. Together, we can make a lasting tribute to them by supporting the Hutch and its mission to end cancer.

I support Fred Hutch because their scientists are world leaders in revolutionizing the way we prevent, detect, and treat cancer. Their mantra is Cures Start Here. Your gift will spark hope for others by enabling Hutch researchers to develop cures faster, paving the way for a future free of this terrible disease.

Please give today in memory of my dear mother, who would have been honored by our efforts. If we are going to end the pain and suffering caused by cancer, we need to put our resources behind a solution. This is now especially important in a time where the government administration has cut funding for cancer research.

Thank you for giving.

Fred Hutch is proud to be an Equal Employment Opportunity (EEO) and Vietnam Era Veterans Readjustment Assistance Act (VEVRAA) Employer. We are committed to cultivating a workplace in which diverse perspectives and experiences are welcomed and respected. We do not discriminate on the basis of race, color, religion, creed, ancestry, national origin, sex, age, disability (physical or mental), marital or veteran status, genetic information, sexual orientation, gender identity, political ideology, or membership in any other legally protected class. We are an Affirmative Action employer. We encourage individuals with diverse backgrounds to apply and desire priority referrals of protected veterans. Read the EEO is the Law poster here.