The iOS version on your device is out of date and not supported by our website.
Please update your iOS for the best Obliteride experience.

In the High Five Club! 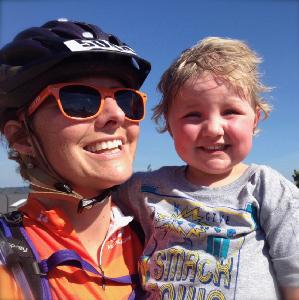 Obliteride has always been bitter sweet for me, and this year no less than ever.  In years past in which I rode in Obliteride there was hope - hope that my little girl, Allistaire, might somehow defy the brutal odds at work against her.  In her four and a half year battle against Acute Myeloid Leukemia, she overcame so many obstacles including over 500 inpatient days at Seattle Children's Hospital, 25 rounds of intense chemotherapy, two bone marrow transplants, genetically modified T-cells and severe heart failure.  In the end, it was not her heart, kidneys, liver or lungs that failed, it was the insatiable appetite of her beastly cancer that in a brutal two week period took a little girl who went to the play ground multiple times a day to mute from the cancer eating away at her brain and finally to her last ragged breath on April 30th 2016.

Allistaire never knew life without cancer.  At just 21 months old, her whole life became consumed by cancer.  On March 6th of this year she would have been 9.  I miss her with all that is with in me.  She was a bright, giddy wildcat of a girl who was simultaneously so gentle, loving and compassionate.  I wish you could have known her...I so desperately wish I could still hear her voice and see her bright blue eyes.  Cancer has ravaged so much in my life and the life of my family.  It has stolen so much...

Allistaire is just one little girl, just one life among so, so many that have been lost to cancer.  The way forward is daunting.  The complexity of cancer - even amongst patients with the same disease - is staggering.  It is a wily foe, ever changing.  Allistaire received that absolute best cancer treatment planet earth and human kind has to offer.  We are indebted to the incredible doctors, nurses and support staff at Seattle Children's Hospital and at Fred Hutchinson Cancer Research Center where so many of the clinical trials made accessible to her gave her another fighting chance.

The total cost of Allistaire's cancer treatment was $10,000,000.  You read that right: 10 million dollars.  And it still wasn't enough.  We have got to put our money up front into research.  Honestly, Allistaire's cancer treatment was like standing my little toddler girl against the wall and spraying her with bullets from a machine gun - hoping enough bullets would intersect with the cancer to take it out with out killing the rest of her.  We need to fund genomic sequencing of patient's disease at the beginning  of treatment.  We must empower researchers to get ahead of the disease by understanding its backbone - its genetic code and what drives the disease.  We cannot keep relying on indiscriminate carpet bombing of bodies.  Immunotherapy is one enormous and amazing body of research that will undoubtedly be part of the answer of curing cancer.

There are few endeavors more worthy of your money - that hard earned money you went to work for and slaved over that computer or at the counter or in the field or in the fire - yes - your money that you worked hard for  - I implore you to consider giving some of it away as an actual tangible investment in the lives of people like yourself, like your own children, like your friends and family that will one day have to face that beast cancer.  Let's help the researchers at Fred Hutch craft weapons that are precise and effective - and let's help them do it a whole lot faster!

Not only can you give your cash - you're also heartily welcome to join our Team Baldy Tops either as a rider, walker, runner or a volunteer.  We'd love to have you join us.  We'll be the one's in the unicorn helmet covers riding fast and riding slow - it doesn't matter - we're doing it because our loves have been and are being threatened.  We want to actually do something about it.  Join us!

Much love to you all and can't wait to see you in orange and spandex!!!